You are here: Home / News & Events / Outstanding HLTA of the Year Awards 2018 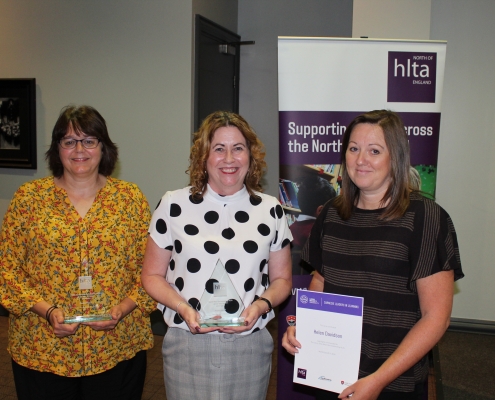 The 2018 Awards for Outstanding Higher Level Teaching Assistants (HLTA) in Yorkshire and Humber, the North East and the North West, were awarded on  Tuesday 18 September 2018 at an evening celebrating the success of HLTAs from around our regions.

The awards for outstanding HLTAs were introduced in 2010 by Carnegie Leaders in Learning, (based at Leeds Beckett University), in partnership with Leeds Trinity University, Northumbria University and Sheffield Hallam University.  HLTAs from across the three regions are nominated by school colleagues for their excellence in advancing the learning of pupils, working effectively as part of the school community and bringing expertise to the staff team. Nominations are now being taken for 2019. Click here for details.

Northumbria University uses cookies to improve your experience on our site. By clicking Accept you consent to our cookies in this device.